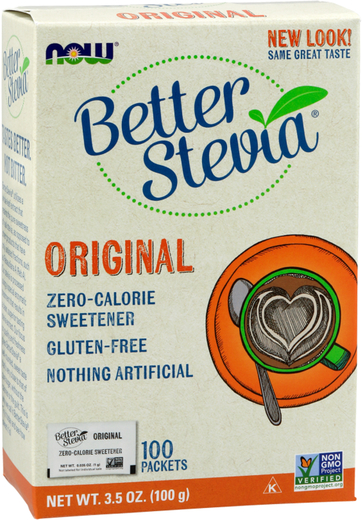 Native to the sub-tropics of Central America and Asia, the stevia plant is a perennial shrub also known as “sweet leaf.” This sweetener is a nutritious alternative to sugar and is perfect in coffee, tea, or baked goods recipes. At PipingRock, we carry the ultimate selection of stevia to choose from, including:

For centuries, folk traditions in Paraguay, Brazil, China, Japan and India have used the tiny leaves of Stevia rebaudina, a perennial shrub, both to add sweetness to foods and to support health. Also known as sweet leaf or sugar leaf, this versatile plant contains high concentrations of steviocide, a white, powdery, and non-caloric substance that is 100 to 400 times as sweet as table sugar. The plants produce steviocide and other steviol glycosides -- or molecules that bind to sugar and allow it to be used by plants or animals -- as a byproduct of natural enzymatic processes.**

The “sugar leaf” first came to scientists’ attention in 1905, when Swiss-Italian-Paraguayan botanist Moises Santiago de Bertoni learned of a sweet plant prized by the indigenous herbalists in eastern Paraguay. Across this region, many native peoples chewed fresh stevia leaves for their sweetness, used dried leaves to sweeten bitter mate’ -- a tea-like caffeinated drink -- and for a range of folk wellness purposes, including promoting heart health. Decades later, the herb came to the attention of Japanese scientists. By the 1970s, it was in widespread use as a sweetener in a number of food products, including candy, gum, soft drinks, soy sauce, bread, seafood and pharmaceuticals. Today, it accounts for almost half of the Japanese sweetener market.**

In North America, it began gaining attention in the mid-1990s, where it has grown in popularity as an alternative to sugar and artificial synthetic sweeteners. In the U.S., stevia supplements are especially popular among consumers who want to decrease their sugar intake, maintain a healthy weight, control their blood glucose levels, and those who prefer to avoid synthetics.**

Scientific studies support the many traditional wellness uses of “sugar leaf.” Research indicates that taking supplements of the herb before eating significantly reduces both post-prandial blood glucose and insulin levels. The herb has also been found to improve glucose tolerance, increase insulin sensitivity and stimulate the body’s natural secretion of insulin in individuals with blood sugar issues.**

Recent studies suggest that the herb may offer cardio-protective benefits, as well. The herb has been found to lower triglyceride levels and modulate inflammation, both actions that promote heart and cardiovascular health. Studies also show that it has an anti-hypertensive effect: It seems to relax the blood vessels, allowing blood to flow more freely and helping to balance blood pressure within normal range.**

“Sugar leaf” contains powerful antioxidants in the form of flavonoids and phenolics. These compounds reduce cell damage from reactive oxygen and free radicals. A derivative of steviocide, isosteviol, has been found to reduce oxidative damage and support normal cell growth. Early studies suggest that this sweet botanical may have kidney benefits as well.**

Antimicrobial compounds, such as tannins, inulins and essential oils, are found within the leaf. Tannins bind with digestive enzymes and proteins in the body to promote healthy intestinal tract function. Inulins, also known as prebiotics, work with tannins to decrease the number of harmful bacteria in the gut, while at the same time promoting the growth of desirable microorganisms that aid in digestion. Inulin has been found to support the immune system and enhance the body’s ability to absorb minerals.**

In addition, research indicates that supplementing with this herb helps create a feeling of satiety while reducing cravings for sweet or fatty foods, making it easier to eat less and maintain a healthy weight.**

Stevia supplements are available in several forms, including dried leaves, powder, liquid extract and tablet form. Some extracts may include added flavorings, such as vanilla or mint, to add to the leaf’s culinary versatility.**

Stevia Directions for Use

When used as a sweetener, there is no set dosage for this herb. For health purposes, dosage may range from 250 to 550 mg of steviocide taken three times per day. Always consult a medical provider before starting supplementation.**