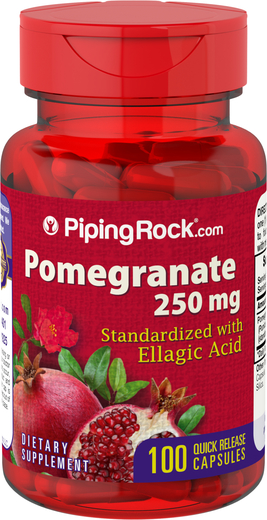 Pomegranate is rich in powerful antioxidants. As a supplement, it supports anti-aging efforts and exercise recovery.** Additionally, pomegranate may:

Native to the Middle East and botanically referred to as Punica granatum, this flowering tree is renowned for its unique fruit. Technically considered a berry, the pomegranate is roughly the size of a large apple and contains hundreds of crimson juice-filled seeds (pomegranate seeds are known as arils) inside its thick red peel and white inner membrane. Pomegranate is a potent source of age-defying antioxidants. It is also rich in vitamin C (one fruit supplies 40% of the RDA), and supplies vitamin E, vitamin A, folic acid and other health-enhancing phytochemicals.**

Cultivated outside of the Fertile Crescent in regions of Asia and Europe, the fruit has had an extensive presence in various cultures throughout the centuries and across the globe. In ancient Egypt, it was considered a symbol of vitality and also appeared in Greek mythology. Buddhists count it as a blessed fruit, and Christianity, Islam and Judaism all make mention of the plant in their respective sacred texts, often in association with fertility and abundance. Additionally, Ayurvedic wellness practices have used the fruit for a variety of health issues for thousands of years.**

The popularity of the fruit in North America has increased dramatically during the 21st century, both due to a growing appreciation of its refreshingly sweet, tart flavor (especially with the resurgence of pomegranate juice) and its much-heralded health benefits, which largely stem from its high antioxidant content. Among the fruit's natural free-radical-fighting antioxidants are polyphenols including catechins, anthocyanins and ellagic acid. These compounds, particularly the punicalagin variety of ellagic acids, have been pinpointed as powerful antioxidants.**

In addition to its high antioxidant activity, which helps with overall health and anti-aging, pomegranate has been studied for many other wellness benefits. Research has shown that pomegranate supplements support cardiovascular health, including balanced blood sugar, normal cholesterol, and healthy blood vessel function. The inflammation-modulating qualities of pomegranate juice also appear to help with circulation and some gastrointestinal issues. Additional research has suggested that the fruit may help to promote recovery from exercise.**

Studies have also found that this exotic fruit’s nutrients are bioavailable; its compounds are easily absorbed into the body, particularly when taken as pomegranate juice.**