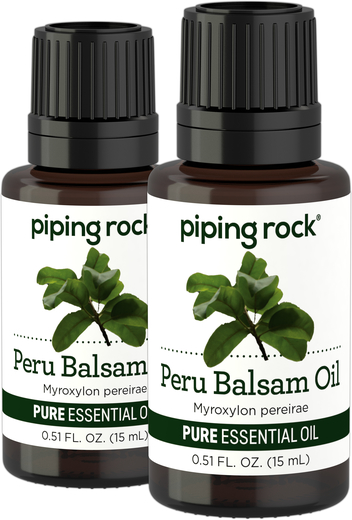 With its rich, sweet aroma reminiscent of vanilla and cinnamon, Peru Balsam is a uniquely captivating oil. In aromatherapy, Peru Balsam oil is popular for:

What is Peru Balsam?

Native to Central and South America, Peru balsam (Myroxylon pereira) is a towering tree, and a member of the Fabaceae family. The tree bears fruit and flowers, but it’s the rust-colored resin that has made it a significant part of traditions (as well as aromatherapy!) for generations.

The name “Peru” balsam is actually a misnomer, as the tree thrives in El Salvador as opposed to Peru. When the tree was first imported into Spain, it came through Peruvian ports, thus earning the name “Peru” balsam. It quickly gained popularity with the Spanish people—in fact, the resin was highly prized as a sacramental ornament by the Spanish clergy of the time. By then, however, the Aztecs had been using Peru balsam for years, growing the trees in their royal gardens.

Peru balsam essential oil is steam distilled from what’s known as “crude balsam,” the resin of the tree. It is extracted from the tree via one of two ways: the first involves removing strips of bark from the tree and boiling them, releasing the resin, which then collects at the bottom of the container. The other involves wrapping a cloth around the exposed wood of the tree, collecting the remaining resin that seeps from the grains. The cloth is then boiled as the bark is and the resin is collected the same.

This thick essential oil emits an aroma that is rich and sweet, with notes of vanilla and cinnamon and just a hint of balsam. Often incorporated into luxurious skin creams and lotions, it is also used frequently in perfumery as a fixative base note. In aromatherapy, Peru balsam is popular for its revitalizing and stimulating of the senses, helping to instill a sense of balance and stability, making it a favorite to go alongside meditation. For some, Peru balsam can help promote feelings of appreciation and contentment, reflecting on all that is good in life.

Peru Balsam Oil Directions for Use

Peru Balsam Oil is for external use only and should be diluted in a carrier oil such as sweet almond, jojoba, grapeseed or avocado oil before being used topically. Do not apply to broken or irritated skin. Always consult your trusted physician before adding any essential oil to your regimen, especially if you are pregnant, nursing or taking any medications. Discontinue use and alert your doctor should an adverse reaction occur. Keep out of reach of children and away from eyes and mouth. Essential oils are flammable.