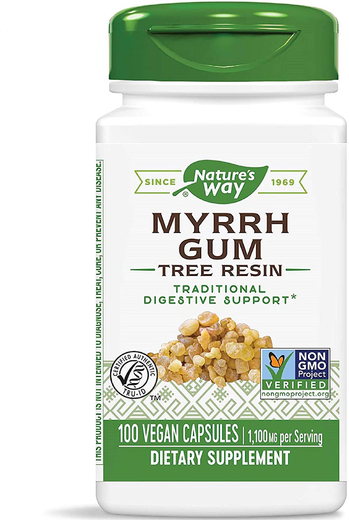 An oleoresin extracted from the sapwood of the Commiphora myrrha tree, myrrh holds a timeless place in human history, impacting everything from ceremonies to religions and folk wellness practices. Myrrh:

Myrrh (Commiphora myrrha) is a timeless plant that holds a special place in human history. Native to the Middle East and eastern Africa, this thorny tree-like shrub can reach a height of 10 feet, and thrives in arid soil. Its treasure lies within its sapwood, which leaks a viscous pale yellow oleoresin through natural fissures. Upon drying, this oleoresin hardens into a red-brown resin. The resin is also called myrrh tears, from the story of Myrrha in Greek mythology who was turned into a myrrh tree.

Used for over 1,000 years, myrrh can be found as incense, in Egyptian religious rituals and embalming, and was once used as a holy anointing oil for high priests and kings. Ever the subject of faith, it is even said that myrrh was one of the three gifts of the magi presented to Jesus in the manger. The word “myrrh” comes from the Arabic word “mur,” meaning “bitter” for the taste and signature warm, earthy-balsamic aroma of the resin.

Myrrh has been used in traditional Asian herbal wellness practices to promote wellness, while Ayurveda praised its rejuvenating properties.** Today, myrrh can often be found in mouthwash and toothpaste, as well as folk salves and tinctures for a number of applications.

While more commonly found in its essential oil form, myrrh is also widely available as ingestible supplements and liquid extracts. In these supplements, myrrh resin may also be called myrrh gum.

Now, get the benefits of this amazing herb in concentrated form! Each 2ml serving delivers 2,000 mg of Myrrh Oleo Gum Resin Extract for your daily routine.