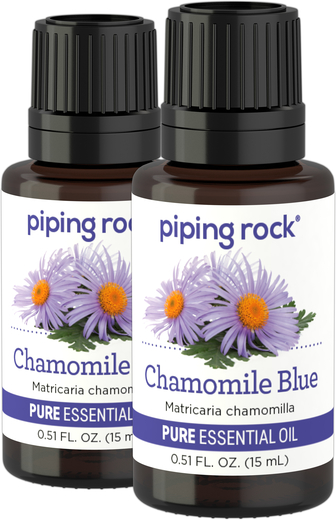 Chamomile oil is available from two species: Roman Chamomile and German Chamomile. Though different in scent, these two oils share similar properties in aromatherapy such as:

The delightful daisy-like blooms of chamomile can be found growing in many parts of the world, where they have been adored for centuries. Their bright yellow centers and white petals come together to form little suns growing from the ground, which is perhaps why ancient Egyptians associated these flowers with their sun god! The name “chamomile” comes from the ancient Greeks, who knew these flowers as “Earth apples”—“khamai” for “on ground” and “melon” for “apple”.

In aromatherapy, chamomile oil is typically available from two species of the same family: Roman Chamomile (Anthemis nobilis) and German Chamomile (Matricaria chamomilla), also known as Chamomile Blue thanks to the distinctly blue color of the oil.

Chamomile blue oil, or German Chamomile oil, can be found growing throughout Europe, North Africa, and Asia. It grows taller than its Roman cousin, reaching a height of 24”, and has smaller flowers and long, narrow leaves.

Steam distilled from the flowers, chamomile blue oil typically has a stronger aroma than Roman chamomile. Its scent is bittersweet and grassy, with a potent warmth that many find positively wonderful. In aromatherapy, this oil is popular for its soothing and balancing properties, helping to instill a sense of serenity.

Roman chamomile is considered one of the oldest herbs used by mankind. It can be found flourishing throughout Europe, its flowers growing low to the ground and surrounded by parsley-like leaves. Roman chamomile loves sunny spots, reflecting its fantastic sunny appearance!

While chamomile blue oil is strong, Roman chamomile oil is more subtle. Its aroma is herbaceous with a perfectly sweet hint of apple. This is perhaps why the ancient Greeks knew the flower as Earth apple! In aromatherapy, Roman chamomile can be sublimely soothing, helping to ease negativity of the past in mindful meditation.

Chamomile Oil Directions for Use

Chamomile Oil is for external use only and should be diluted in a carrier oil such as sweet almond, jojoba, grapeseed or avocado oil before being used topically. Do not apply to broken or irritated skin. Always consult your trusted physician before adding any essential oil to your regimen, especially if you are pregnant, nursing or taking any medications. Discontinue use and alert your doctor should an adverse reaction occur. Keep out of reach of children and away from eyes and mouth. Essential oils are flammable.