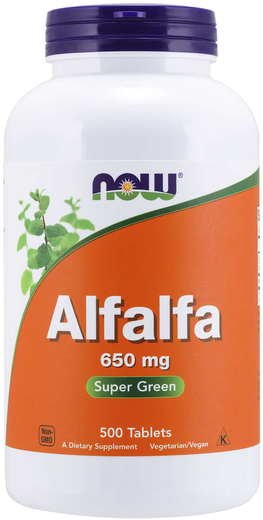 Consumed by humans for centuries, alfalfa is rich in beneficial antioxidants and saponins.** A supporter of cardiovascular wellness, alfalfa supplements can:**

A succulent plant, alfalfa is perhaps best known as an animal feed, historically reported to have made horses and cattle stronger. Human consumption of the plant dates back centuries; it was used as a traditional herb for kidney and cardiovascular health, as well as to support overall well-being.** Alfalfa has appeared in ancient wellness practices around the world, including Chinese, Ayurvedic and Native American traditions.

Today, alfalfa is popular for helping maintain healthy cholesterol levels already within normal range.** This biological action is due to its considerable fiber content, along with its health-promoting flavonoids and a class of compounds called saponins.** Saponins in particular may bind with bile during the digestion process, which seems to influence cholesterol absorption.** Saponins may also interfere with the production of bile itself, further supporting normal cholesterol levels.** Alfalfa’s support of cholesterol levels already within normal range helps to optimize overall cardiovascular wellness.**

With its nutrient-dense profile, including vitamins A, C, E, and K along with minerals iron, calcium, potassium, and phosphorous, it is considered a health-promoting green food for overall well-being.** Alfalfa supplements are sourced from the plant’s seeds and/or leaves. Supplements are sometimes available from organically grown alfalfa plants. The herb may be brewed into a tea, but is more commonly presented in capsules, tablets, or as a tincture.

Alfalfa Directions for Use

Consult with your physician before beginning any regular supplementation. There is no standard alfalfa dosage, but it is commonly taken at a level of 500 mg per serving.